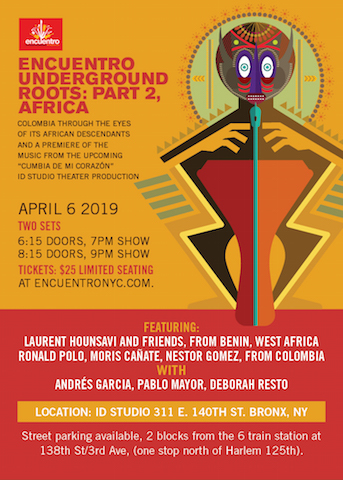 A peak into the Underground Series from the fall:

ENCUENTRO NYC Colombian Music Festival is back with Encuentro Underground- Roots, Part II: Africa, Colombian music seen through the eyes of its African descendants, Saturday, April 6, 7pm and 9pm. The magical and fiery cross-collaboration by A Palo Seco Flamenco Company and Encuentro artists at the first part of the series SPAIN to a packed house and riveted audience will continue with the deep rhythmic traditions of Africa and more inspiring Artists from around the world. The Encuentro Underground series takes place at ID Studio, one of NYCs newest and most vibrant artistic centers in the South Bronx (311 E. 140th St., two blocks from the 6 train).

The second in the Encuentro Underground Series features singer Laurent Hounsavi (Benin, West Africa/Paris) and a small ensemble of NYC-based West African musicians who will open the concert giving homage to the rich rhythmic traditions that West Africans historically brought to Colombia during the slave trade. Steeped in the African traditions that later developed in Colombia, Grupo Rebolú leaders Moris Cañate and Ronald Polo (of Barranquilla, Colombia) along with musicians Nestor Gómez, Andrés Garcia and Pablo Mayor of Folklore Urbano NYC will carry the thread of Africa to the beloved Cumbia and Currulao that developed along the Caribbean and Pacific coasts of Colombia. The set will end with a musical preview of the upcoming ID Studio theater production Cumbia de mi Corazón, a musical score written by Pablo Mayor based on Colombian standards. The event will take place in the three-floor brownstone and multi-disciplinary art space of ID Studio, the home of Colombian actor German Jaramillo and his theater company, but also the rehearsal and recording studio run by composer and pianist Pablo Mayor, and dancer Daniel Fetecua.
Each set will take place underground in the downstairs music studio with an intimate and up-close performance by these world-renowned artists.