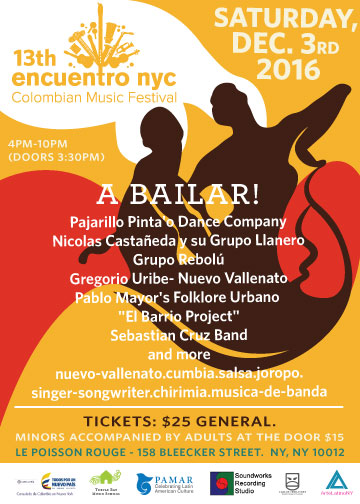 ENCUENTRO NYC Colombian Music festival, founded by musicians Pablo Mayor and Anna Povich de Mayor, celebrates its 13th anniversary with a motto in mind “A Bailar!” (Let’s dance). Six hours of back-to-back performances at Le Poisson Rouge (158 Bleecker Street. NYC) on December 3rd, 4-10pm.  More than 10 acts will be performing the variety of rhythms and genres of Colombian music. The show will transport the audience to various diverse regions of the country through imagery, sound, and motion.   Pajarillo Pinta’o Dance Company, led by maestro Daniel Fetecua, will through theater, artistry, and dance demonstrate how Colombians move to the music in the different parts of the country.

“The concept behind Encuentro 2016 is to bring an spectacle of music and dance, carefully putting together music and artists to perform the type of repertoire from the diverse regions of Colombia which Colombians love most: music for dancing”, says pianist and composer Pablo Mayor. “Dance was essential to my life growing up in Cali, Colombia, and my understanding of the music was always based on the movements associated with these rhythms.”

The evening will begin with a parade of musicians and dancers waving hankerchiefs in the style of chirimia from Colombia’s very African Pacific coast.   Encuentro NYC will then bring on stage award-winning harpist Nicolás Castañeda from Boston, and a group of skilled musicians to play a set of frenetic joropo from the Eastern Plains region of Colombia.  Ever-popular Gregorio Uribe will perform a set of vallenato music from the Caribbean coast of Colombia on acordeón in his own style that he calls “nuevo vallenato.”

Pablo Mayor will put a set of cumbia in banda style-acoustic “marching band” music with an addictive cumbia groove, and later in the night Pablo’s own Folklore Urbano Orchestra and their “El Barrio Project” will present a set of salsa with the sound of Pablo’s childhood growing up in Cali, Colombia, the capital of salsa outside of NYC.  And in the signature style of the Encuentro, Pablo and Anna give a Bohemian touch with a set of singer-songwriter music to give the audience a breather, led by guitarist Sebastián Cruz and his band with the great Satoshi Takeishi on drums, and familiar Encuentro NYC artists Alejandro Flórez on guitar, Ricardo Gallo on piano.  Grupo Rebolú will close the night with the driving Afro-Colombian rhythms of the Caribbean coast led by Barranquilleros Ronald Polo and Morris Cañate.

“This year’s Encuentro NYC aims to bring the vibrancy of Colombia’s traditions in a more visceral way, showing the inseparable partnership between music and dance that one finds in Latin America, and particularly, in Colombia,” states Co-Director, Anna Povich de Mayor.  And we couldn’t have a more perfect partner in this endeavor-maestro dancer and choreographer Daniel Fetecua (formerly of the Limon dance company).”  The audience is encouraged to come in traditional clothing and hats from whatever regions they might come from,  or be familiar with.  And those who are not Colombian, wear your dancing shoes!